Oddly enough it’s not only parents who will frequently ask this question but lawyers and judges as well seem to be preoccupied with the notion that somewhere out there someone has concluded that there is a “best” access schedule for children of divorced parents.

I often answer, in a feeble attempt at humor, that I am opening a children’s clothing store in which I’m going to only sell one size of jeans and one size of shirts. Silly, of course, but not a whole lot sillier than asking what the best access schedule fits all children. 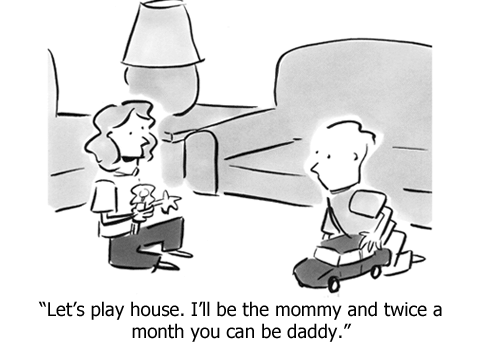 I would like to believe that every thoughtful parent knows that one size does not fit all and that when trying to devise the right kind of parenting schedule for children there are endless numbers of factors that need to be considered: the age of the child, the child’s individual temperament, the child’s level of maturity, the accessibility of each parent, the support system that each parent has in place, the past history of attachment between parent and child, and perhaps most importantly, the ability that the parents have to manage any reasonable access schedule in a civil and collaborative fashion.

In this posting I’m certainly not going to address every one of these factors – and, in fact, those I’ve mentioned above only scratch the surface of the many variables that go into a thoughtful and appropriate parenting schedule. But recently I’ve encountered a few cases which have led me to decide to write a little bit here about the notion of “attachment”. First a brief description of a family I am working with (names and other identifying characteristics are significantly changed):

Joe and Laura were married for a brief period; Laura (who had a history of drug addiction) gave birth to Sam, their son, and soon after, abruptly left the home. Joe was left to raise Sam for the first 2 ½ years of his life. He petitioned and received full custody of his son from the Court. (The couple also were formally divorced). During this time Laura stayed intermittently in touch with Joe and visited with Sam every few months. However, not long after Sam’s second birthday she announced that she had been clean for well over a year and asked Joe whether he might agree to a change in the custody arrangement. Joe refused. Laura went to court, was awarded periodic supervised visitation, then overnights, and finally more substantial parental access. By this time Sam was three years old and as part of their custody agreement they were required to work with a parent coordinator – and decided to work with me.  Laura has complained bitterly that Joe undermines her parenting and reinforces for Sam that Mommy cannot be trusted and that she had left him. She describes a “barrier” between herself and her son that she feels is being fostered by his father [and stepmother] – so much so that apparently Sam will often spontaneously announce that he loves Daddy more and that Diana (Joe’s wife) is his real mother. Joe denies having ever spoken negatively to Sam about his mother. Further, he has strongly suggested that he believes that it is extremely important that Sam have a good relationship with his mother because he knows how hard it was for him [Joe] that his mother died when he was a young child.
Where do we first locate that "home base" from which we can go out into the world and take the risks that are going to make a secure future possible for us?  I remember first being exposed to the work of John Bowlby when I was in graduate school. Bowlby, often considered the “father of attachment theory” made the remarkable observation of children during World War II who had been removed from English cities in order to protect them from bombing. They were cared for in very well appointed and highly professional institutional settings and yet they seemed to be profoundly unhappy despite the fact that their physical needs were being more than adequately taken care of. What he concluded, and what has become the backbone of our understanding of the early infant experience, was that providing for a child’s physical needs does not go far enough in assuring that a child will be emotionally and psychologically secure. In fact, he saw little connection between the provision of food and shelter and a child’s psychological well-being. (By the way, this flew in the face of the prevalent Freudian view of the time that a child’s attachment grew from physical dependency).

What was particularly striking about Bowlby’s work was his observation that these children were also having difficulty in forming new attachments, despite the fact that the adults who were caring for them did everything in their power to give them what they needed.  Not surprisingly, Bowlby and many later theorists made the assumption – not unreasonable, of course – that it was the mother-infant relationship that was the primary and foundational one. What we understand now, of course, as fathers have become more involved in primary parenting – even of infants – is that this primary attachment can take place between either parent and infant, or for that matter the infant and any consistent care giver.

So what Bowlby taught us is that the emotional security formed by that initial close relationship with a loving parent provides us with solid beginnings of trust and security that are the building blocks of a healthy personality.

So back to Joe, Laura, and Sam. There are many challenges for both these parents and their child because if we apply what we know about attachment theory we can begin to understand the difficulties that they are having. Joe, of course, is convinced that there is some fatal flaw in Laura’s ability to adequately and appropriately be a mother to her son, based on her own history, her history with him, and a good deal of residual bitterness that he bears toward her for abandonment. Laura has no doubt that the major obstacle she faces in trying to create the kind of relationship that she wants to have with her son is being prevented and poisoned by Joe’s refusal to allow it to occur naturally. And three-year-old Sam? Sam’s a little young to understand all the complexities of John Bowlby’s attachment theory. But what he does know – and doesn’t even know he knows – is that the initial, foundational connection in his life is with his father; that’s the connection, that’s the person, upon whom he can unwaveringly depend and upon whom he has absolute trust.

My work with Joe and Laura (I’ve never met Sam) centers around helping both of them to understand what the implications of attachment theory are for their parenting Sam. One is that there is no victim or villain here. The past, as they say, is history – and it can’t to be rewritten and it is unfair of both parents to ask Sam to bear the burden of it. Understanding the importance of that foundational attachment which Sam has with Joe can make it possible for both parents to focus on what their son needs rather than upon recriminating with each other about who is at fault. It’s not easy. Sam was born into a bitter and unfortunate unraveling of his parents’ marriage – as many kids are. The challenge for his parents is finding a way to focus on Sam’s need to have both of them, to have two parents with whom he feels safe and trusting. I’ve told Joe and Laura that Sam may need some help with this, perhaps as he gets a little older, and can best benefit from some psychotherapeutic intervention. Meanwhile, they’ve got the hard work to do and that is to reinforce for Sam that each of them wants him to have a strong relationship with the other.
Posted by Unknown at 12:29 PM